Have you Really Looked at the Back of the $2 Bill??

I just had someone point this out to me over the weekend. I was shocked, amazed, then upset all within seconds. I was shocked that I never noticed it. Amazed that there is actually a black man sitting at the table with all of the "Fore Fathers" of the United States of America. Then, I was upset because here goes another part of OUR history that is has gone unseen. The following article is from the Black Homeschoolers Club on NING. The Gentleman is John Hanson Moor. He was allegedly the first President of the United States. Yes, A black man!!! What do you think?? I am still looking up this info regarding this history. Clearly you can see that there is a man of color on the back of the $2 Bill.

What is on the Back of the Two Dollar Bill? The back of the $2 bill has an engraving of the signing of the Declaration of Independence. In the image is a man who has dark skin and wearing a powdered wig while sitting at the table just to the left of the men standing in the center of the engraving. This dark skinned man is John Hanson in his position as president of the continental congress. In the original painting hanging in the U.S. Capitol Rotunda, the dark skinned man does not appear!!! 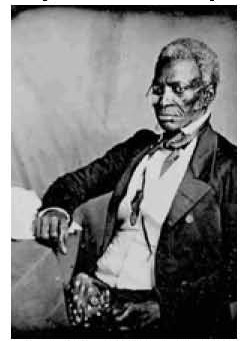 Was the First President of the United States! 1781-1782 A.D.??? George Washington was really the 8th President of the United States! George Washington was not the first President of the United States. In fact, the first President of the United States was one John Hanson. Don't go checking the encyclopedia for this guy's name - he is one of those great men that are lost to history. If you're extremely lucky, you may actually find a brief mention of his name. The new country was actually formed on March 1, 1781 with the adoption of The Articles of Confederation. This document was actually proposed on June 11, 1776, but not agreed upon by Congress until November 15, 1777. Maryland refused to sign this document until Virginia and New York ceded their western lands (Maryland was afraid that these states would gain too much power in the new government from such large amounts of land). Once the signing took place in 1781, a President was needed to run the country. John Hanson was chosen unanimously by Congress (which included George Washington). In fact, all the other potential candidates refused to run against him, as he was a major player in the revolution and an extremely influential member of Congress. As the first President, Hanson had quite the shoes to fill. No one had ever been President and the role was poorly defined. His actions in office would set precedent for all future Presidents. He took office just as the Revolutionary War ended. Almost immediately, the troops demanded to be paid. As would be expected after any long war, there were no funds to meet the salaries. As a result, the soldiers threatened to overthrow the new government and put Washington on the throne as a monarch. All the members of Congress ran for their lives, leaving Hanson as the only guy left running the government. He somehow managed to calm the troops down and hold the country together. If he had failed, the government would have fallen almost immediately and everyone would have been bowing to King Washington. In fact, Hanson sent 800 pounds of sterling silver by his brother Samuel Hanson to George Washington to provide the troops with shoes. Hanson, as President, ordered all foreign troops off American soil, as well as the removal of all foreign flags. This was quite the feat, considering the fact that so many European countries had a stake in the United States since the days following Columbus. Hanson established the Great Seal of the United States, which all Presidents have since been required to use on all official documents. President Hanson also established the first Treasury Department, the first Secretary of War, and the first Foreign Affairs Department. Lastly, he declared that the fourth Thursday of every November was to be Thanksgiving Day, which is still true today. The Articles of Confederation only allowed a President to serve a one year term during any three year period, so Hanson actually accomplished quite a bit in such little time. Six other presidents were elected after him - Elias Boudinot (1783), Thomas Mifflin (1784), Richard Henry Lee (1785), Nathan Gorman (1786), Arthur St. Clair (1787), and Cyrus Griffin (1788) - all prior to Washington taking office. So what happened? Why don't we ever hear about the first seven Presidents of the United States? It's quite simple - The Articles of Confederation didn't work well. The individual states had too much power and nothing could be agreed upon. A new doctrine needed to be written - something we know as the Constitution. And that leads us to the end of our story. George Washington was definitely not the first President of the United States. He was the first President of the United States under the Constitution we follow today. And the first seven Presidents are forgotten in history

Review of the evidence that John Hanson was a Moor:

The picture on the $2 Bill is of the signing of the Declaration of Independence on August 2, 1776. John Hancock was the President of the Continental Congress not John Hanson in 1776. 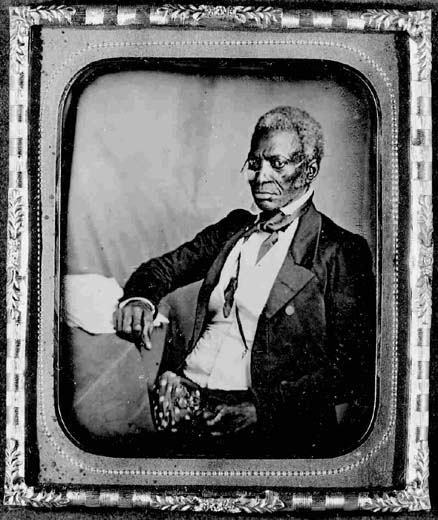 Image Courtesy of the National Archives

The picture of the Moor, John Hanson, is actually a Sixth-plate daguerreotype, ca. 1856 (http://www.loc.gov/exhibits/treasures/trr033.html). There was no photography in 1783 when President Hanson died.

Additionally, President Hanson was the 3rd President of the United States in Congress Assembled, not the first. He was preceded by Samuel Huntington (1st) and Thomas McKean (2nd). On my website, johnhanson.net, I have an image of the letter signed by Hanson as President thanking Thomas McKean for serving as President. The picture I have on the website is John Hanson.