The kids set the stage a blaze with stellar performances at the unforgettable red carpet event "Healing Through Music: "Nu Skool sings Old School" on Saturday March 5, 2011 at the Celebrity Centre, Garden Pavilion in Hollywood, CA. This Ground Breaking series is presented by Kierrah Events and Velvet Ropes ENT in benefit for The Kierrah Foundation which assist transitional aged women and their children from the foster care system. The Kierrah Foundation was founded by Pamela "Brandy" Sanders and her husband Stan "Unc" Sanders in 2004. Stan Sanders passed on February 7, 2009, Brandy keeps his legacy alive in running the Kierrah Foundation.

Nu Skool sings Old School was an event unlike any other. Filled with the rising stars of today and the brightest stars of tomorrow, these young people wowed the audience with their amazing melodies of yesterday's hits. The show gracefully opened with an heart stopping performance by young contortionist Mako Veronica who traveled all the way from Norway and exhibited beautiful acrobatics to the legendary song "Rise" by Herb Alpert .

The audience sat with anticipation as these young superstars exceled with amazement. One by one these young babes took the stage and gave their all in singing some great music. Young singer Chris Lyric, in just breaking his leg the night before, made it up on stage and began to sing soulfully Donnie Hathaway's "Song for You" in special dedication to Brandy Sanders. Brandy took the stage with tears rolling down her face and said," The Morning that my husband passed he dedicated this song to me." Celebrity actress/Singer 9 year Tina Turner...OOOPs I mean Lil Nay Nay performed "Proud Mary" with her back ground dancers taking all the way back to Nutbush!
Prior to opening his song, Young Sage Ryan took the stage with his guitar singing" Simple Song of Freedom" said this song is for unnecessary wars happening everywhere.
Young Singing Sensations and Grandsons of Legendary Singer/Songwriter Brenda Lee Eager, The Simmonds Brothers harmoniously blew The Jackson Five's "I'll Be There". Miss Ayanna Stokes gave the crowd "No one in the World" by Anita Baker. Pop/R&B Group Misha Rose did their rendition of Stevie Wonder's "Superstition" and broke it down. Sadie Diamond Way was "Walking on Sunshine" skipping across the stage like a beautiful daisy. Lovely young Amber Barbell sung Michael Jackson's "Who's Loving You."hitting all those powerful notes. Tender Miss Sophie Patterson harmonized classical Barbara Streisand's "Don't Rain on My Parade."  The youngest performer, adorable 7 year old little Juliana "Sugar" Pincus sang her little heart out with "I Feel the Earth Move." Darcy Stone's crooned her rendition of Chaka Khan's "My Funny Valentine"very beautifully. So did young Miss Darla Beaux singing the classic song "At Last" by Etta James.
Jesreal "Jesse " Alford ever to softly with her mighty voice sang "So Amazing" by Luther Vandross. Thandiwe Kara Durdin-James proclaimed "Out Here on My Own" by Irene Cara dressed in her amazing 80's gear. Looking like a young Bette Midler, Madisen Carter owned the stage with "Wind Beneath My Wings." Olivia Lauletta sang out loud so wonderfully " Don't Cry Out Loud" by Melissa Manchester.
Here is the complete list of all the songs these young people performed so eloquently with Old School in their new school souls.

Sadie Diamond Way - "Walking on Sunshine" - Katrina and the Waves

Thandiwe Kara Durdin-James - "Out Here On My Own" - Irene Cara

The Simmonds Brothers - "I'll Be There" - Jackson 5

Chris Lyric - "A Song for You' - Donny Hathaway

Ayanna Stokes "No one in the World"- Anita Baker

These legends would be so proud to here their songs resonated with such greatness as these beautiful young people displayed. It was heartwarming and refreshing.


"Randy Jackson, Steven Tyler and Jennifer Lopez needed to be here to see this, " exclaimed Brandy Sanders. The afternoon was indescribable of the level of talent these young people posses. Monique Kirby, Mother of Lil Nay Nay stated "We need to take a show like this to the Staple Center. These kids have it!"

Giving, Caring, Sharing, Loving and Listening to the babes!

Posted by Queenbsweet at 11:21 AM No comments:

Community Activist/Philanthropist Rev. Alfreda Lanoix (Rev. Freda) is Coming out...AGAIN!!!! This time she is coming out with her new friend Mz. Hellraiser and her Highly Anticipated, next "New York Best Seller" Book Go To Hell !!! This is the official E-Book Release of the riveting novel which takes you on a voyage of in-depth celebration, inspiration, and revelation!!! 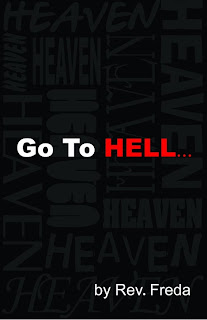 Have you ever questioned your identity, your religion, your sexuality, your being and spirituality based on society's standards? Go to Hell is a book that you MUST read. Go To Hell is the compelling book which is comprised of Rev. Freda's Life experiences turned into a valuable resource tool that provides insight to the" Facts of Life". She says, " As I saw it, my life appeared to be a series of challenges and situations that produced the same outcome: dissatisfaction, disquiet, “hell”. I grew more and more tired of it, so I made a commitment to myself to embark upon a journey of meditation, research, reading of positive, affirming books, and purposeful solitude in order to find answers. " "Go to Hell" is already creating a buzz all over the internet.

Rev. Freda is a distinguished community leader vastly acknowledged for "Love at Work... The Exchange" Fellowship, being the former COO of the Minority Aids Project L.A.and her community activism for over 3 decades. She has bestowed her wealth of knowledge and wisdom upon her fans in "Go To Hell." She has arrived! She is shining her light for everyone to see and absorb!

Go To Hell is available for purchase for the very low introductory price of $4.99 online at Amazon, Barnes and Nobles, Smash Book and her website AlfredaLanoix.com!
Once you open it, you will not take your eyes off of it until the end! Get your copy now!

About Rev. Alfred Lanoix:
Reverend Alfreda Lanoix was born to be a shaker. She was born in Kansas City, Missouri in 1955. She was the eldest of six children. She is the mother of 2 children. Freda served as Board Chairperson of the Unity Fellowship Church Movement, Chief Operations Officer for the Minority AIDS Project and Love Is For Everyone, Inc, and Director of Marketing for L.I.F.E. Records. She was named Interfaith Committee Chair of the Los Angeles County Second District HIV/AIDS Community Coalition and served on the Statewide HIV/AIDS Church Advisory Board. Over the years, she received numerous awards and commendations from her colleagues, peers, and the city of Los Angeles for her tireless service. In 2002, Freda resigned her ministerial position at Unity, freeing herself from what she describes as the restrictive "walls of religion” and the “hell of ministry”. She founded Love at Work ... The Exchange, a weekly gathering that is equal parts group therapy session, metaphysical lecture, social get-together and new school revival, which, by design, is blurring the lines between race, religion, spirituality and sexuality. She has made several guest appearances on television and radio. Freda is currently in demand as a workshop facilitator, keynote speaker, lecturer, conference trainer and guest panelist.