Showing posts from February, 2011
Show all

Ricoshade on the Indie Lounge!! 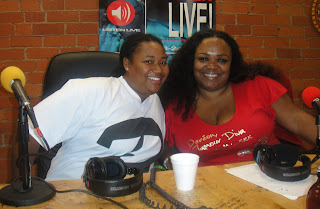 Check out Legendary Hip Hop Artist Ricoshade as she talks about being the Musical Supervisor for the Soundtrack of recently premiered Pan African Film Festival Film "Love ....Another 4 Letter Word" . She also shared the recent launch of her clothing line, Pride Wear and her upcoming projects. Also featured on the show was Jami Templeton, Miss Jay , Ready For The World and Stix!!! The show was off the chain. You can check out the Indie Lounge every Tuesday  from 5PM-8PM on  www.latalklive.com Hosted by the Saba Saba, X Man, King Rasheed and the Beautiful Phyre Blaze!!! Check out the pics below! Ricoshade & Phyre Blaze Lane Saba Saba, Ricoshade, Phyre Blaze Lane Ricoshade, King Rasheed, Miss Jay Miss Jay & Ricoshade Ricoshade with the Indie Lounge Fam Ricoshade & Stix
1 comment
Read more

Luenell snuggles up to Chappelle 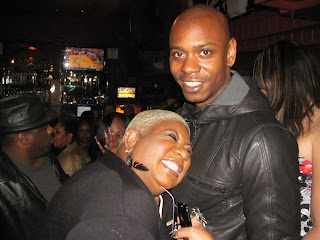 Luenell along with comedian Red Grant hosted NBA All Stars comedy show entitled “Mo’ Better & Mo’ Funny Uncensored” at the Improv on Melrose.   Just when you thought it couldn’t get mo’ better Dave Chappelle was spotted in the crowd. Later, after her set, Luenell could not hold back   her affection for the legendary comedian.   Here she is putting the sqeeze on the oft times controversial comedy wonder. Also in the house… Eddie Murphy ! (By: Eugenia Wright)
Post a Comment
Read more

Queen B on the Indie Lounge

February 08, 2011
Look at the full Ustream video  of  Betrice Coleman-Sweet AKA Queen B on the Indie Lounge Today talking about PR. Special Shout out to the Fabulous Hostess Phyre Blaze Lane, Amazing King Rasheed, Saba, and Anthony!!! They are so amazing. We were graced with a live performance by ANDUZE!!!! Check it out!
Post a Comment
Read more 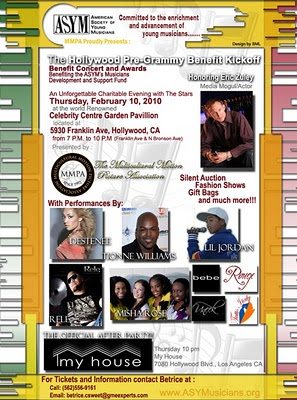 The Multicultural Motion Picture Association Presents Hollywood Pre-Grammy Benefit Kick Off Benefiting American Society of Young Musicians (A.S.Y.M) It is going to be an  unforgettably charitable night with the stars!  It is an Exclusive Hollywood event presented by The Multi-Cultural Motion Picture Association (MMPA) on February 10, 2011 at the stellar Celebrity Centre located at 5930 Franklin Ave, Hollywood, CA from 7 P.M.-10 P.M. Join us for an unforgettably amazing evening of celebration. As you may know, For 18 years The MMPA is highly recognized for it's annual highly anticipated Diversity Awards where they honor Hollywood's elite whose overall body of work , behind or in front of the camera, has brought dignity and credibility to their chosen work, which have been an example and inspiration for others to follow. Past honorees include Oliver Stone , Michael Mann , Halle Berry , Taraji P. Henson , The Cast of Glee , Salma Hayek , Chow Yun Fat , Da
Post a Comment
Read more 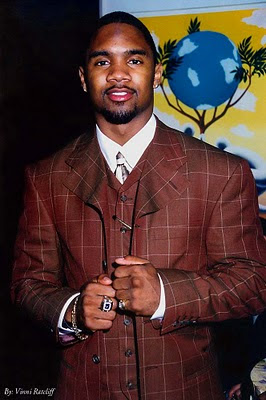 Luenell leads the line-up of luminaries for February 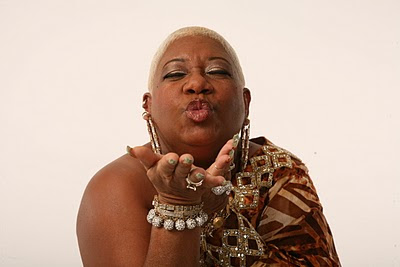 The pop cult comic glows on The Laugh Out Loud Comedy Festival on Showtime; Way Black When on TV One and Funny or Die on HBO among others Photo by: Robert Kley Comedienne Luenell shines in February as she takes over TV airwaves appearing in comedy shows on a variety of networks, from Showtime to HBO to TV One to ABC.   The quick-witted comic will demonstrate why she is comedy’s “brightest star” (EURweb columnist). It was just a few years ago that audiences became acquainted with Luenell through her several appearances   on” BET’s Comic View” as well as Katt Williams’ Pimp Chronicles Tours I and II. Through these vehicles fans across the country in urban communities were able to partake in the Luenell “experience” and see her spitfire comedy performance up close.   In earlier years, Luenell twinkled on the big screen in films,” The Rock” and “Never Die Alone,” but she didn’t light up the sky until the big time blockbuster “Borat.”   Ever since then, it’s been up, up
2 comments
Read more
More posts