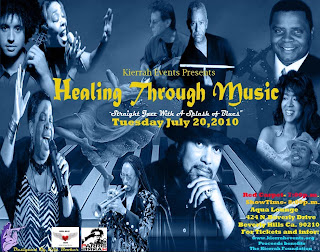 Kierrah Events Presents: HEALING THROUGH MUSIC "STRAIGHT JAZZ WITH A SPLASH OF BLUES"

(Beverly Hills, CA )-On Tuesday, July 20, 2010, Kierrah Events will present the 1st of a ground-breaking series entitled Healing Through Music. The very first showcase is subtitled "Straight Jazz with a Splash of Blues" located at the prestigious Aqua Lounge in Beverly Hills, CA.

Healing Through Music is a "Drop In" Jam Session. Jam sessions provide a chance for new and emerging players to test their skills in front of an audience, while allowing them to listen, play and network with other well-established professional musicians. On this exceptional night you will experience a jam session unlike any other with sounds and melodies of legendary singers, songwriters, musicians and producers. Come enjoy jazz on an upscale level in an upscale environment for an extraordinary cause.

Our Musical Director for the evening is none other than World Renowned Conductor, Composer, Pianist Maestro Delbert Taylor. Maestro Taylor has recorded with such artist as Natalie Cole, Gil Scott-Heron, Fred Wesley, Slave and the Friends of Distinction and many more legends.

World Renowned Bassist, Composer Bob Lee will be in the house as well.
Featuring a showstopping performances by Legendary Singer Songwriter, Musician, Composer Brenda Lee Eager. Brenda has performed with Ray Charles, Jerry Butler, Donny Hathaway and many others. As a songwriter Brenda has written songs for Bobby Womack, Mavis Staples and the Staples Singers, Pops Staples, Gladys Knight, Peaches and Herb, and recently a Platinum single with Prince.
Musician, Singer, Producer Les July. Les has been described in the press as "Seal Meets Sting in Strawberry Fields". Les gives of his time by volunteering at Cedar-Sinai Medical Center as a Music For Healing Therapist. He has worked with top artists in every vein of contemporary music from Slash, K.D. Lang, Dr. Dre. and Herbie Hancock.
Legendary Guitarist, Background Vocalist Miles Joseph. Miles has shared the stage with artists such as Bob Dylan, Aretha Franklin, Billy Preston, BB King, Ivan Neville, Joe Sample with Steve Gadd & The Soul Committee, Average White Band, Eric Clapton, Tom Petty, Bruce Willis &the Accelerators, Albert King,The Jones Boys, Rickie Byars- Beckwith and many more.
Singer, Songwriter, Producer Dian Wilson. Dian has recorded with jazz greats Stanley Clarke, Michael Hoppé, worked with Dizzy Gillespie and performed with the Louis Taylor Quartet.
Vocalist, Musician Jay Jackson. Known locally as an Emmy winning reporter for CBS2/KCAL9 Los Angeles, Jay is a nationally recognized artist who has appeared on the Oprah Winfrey Show. He has shared bills with giants such as Nancy Wilson (Vino Jazz Festival), Azar Lawrence (Jazz For Lovers) and Rose Gails (The World Stage), just to name a few. Jay is going to fuel the audience with his outstanding voice.

Confirmed Celebrity Guests include: Kierrah's Angel of Laughter and the Original Bad Girl of Comedy Luenell, Pop, R&B, Hip Hop Singer Trueful, International Film Star, Celebrity Fitness Trainer Xango Henry and many more to come!
THIS IS A DROP IN JAM SESSION SO YOU NEVER KNOW WHO MAY SHOW UP TO JAM. It will be a night full of surprises! All that jazz and then some! You don't wanna miss this event!!!

Healing Through Music
"Straight Jazz with a Splash of Blues"
Tuesday, July 20, 2010

To get more info or purchase tickets for Healing Through Music, please go to WWW.KIERRAHEVENTS.ORG.