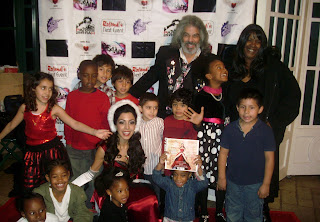 (Hollywood, CA)- It was all about the kids at The 6th Annual Kierrah Foundation Holiday Extravaganza which took place on Wednesday Dec. 22, 2010 at The prestigious Celebrity Centre located in Hollywood, CA. This Red Carpet, star studded holiday celebration was for the benefit of The women and Children of The Kierrah Foundation. There was a fabulous fashion show coordinated by Hollywood's Most Notorious Fashion Coordinator, Parris Harris.  The Kierrah Kids and Kierrah Star Models rocked the runway with The Sidney Collection, Designs by Kevin James and Stoned Out Design T-Shirts by Latacha Knighten that were specifically designed for each child that attended the celebration.
Grand Performances by Rising Sensation Roxy Darr, Actress/Hip Hop Artist Lil Nay Nay, Singer Ayanna Stokes, Maya and Mandy of Heroine December and Legendary Singer/Songwriter Brenda Lee Eager along with her very talented grandsons The Simmonds Brothers. Miss Roxy Darr was dressed just like the Holiday Barbie that was on the flyer for the Holiday Extravaganza! The kids and adults were in awe of just how gorgeous she was.
The event was hosted by young stars brother and sister Carla and Carlon Jeffrey. The red carpet was hosted by Hip Hop artist Rashaun Peters.
Brandy Sanders,Founder of The Kierrah Foundation presented an The Kierrah Angel of the Year Award to Actress Parker Mckenna Posey for all her hard work, dedication and commitment that she has put forth with the foundation.
Starmaker David Harrison Levi came to the stage and announced that he will be honoring Brandy Sanders with The 2010 Citizen of the Year Award which took place Thursday December 23, 2010. What a exceptional way to celebrate the birthday of the holiday angel herself, Brandy Sanders. Happy Birthday rang out all over the Celebrity Centre soon after David Harrison Levi stepped down off the stage.
The Celebrity Centre was a magic holiday castle decorated so perfectly for Holiday Cheer. There where 4 tables filled with toys and there were some great women's gifts and certificates that were so graciously donated by Natalie Harper and NBC Universal.
Celebrities  who came out to support The Kierrah Foundation included Actress and Reality TV Star Sensation Tiffany "New York" Pollard, Actor Charyse Monet, Star Maker David Harrison Levi, Carla Jeffrey, Carlon Jeffrey, Lil Nay Nay, Parker Mckenna Posey, Ayanna Stokes, The Simmonds Brothers, Brenda Lee Eager, Celebrity Stuntwoman/Actress April Weeden Washington, Child star Kiera Washington,  Actor Exie Booker,  Hip Hop RaShaun Peters, Plus Size Supermodel Norva Michelle Williams, The 2011 Ethnic World Queens and many more.
Without a doubt a night of true Holiday Joy!
Special appreciation to the Celebrity Centre for hosting such a remarkable event!!
Special Thanks to our Holiday Angels: Shana Meyerson, Joseph Johnson & Stella, Lynne Bieh, Katherine Abernathy, Chrisena Coleman, Zoe Vincent Kimberly Fowler, Bucky Rogers, Javelyn Clevett, Howard Henley, Carla Dorhan Spiller, Christine Haymond, Sharon Ann Smith, Debra Hall, Jeff Lawson.  We could have pulled it off without your support.
And a Very Special to The Kierrah Foundation's sponsorship Coordinator Revina Thomas for her endless support and dedication.
Look at the millions of pics from an evening of giving