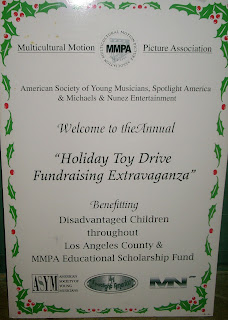 There were tons of toys and donations given for disadvantaged children.The Beautiful Christmas tree sat on stage with the many toys that would light up any child's world.  The amazing show was hosted by Sam Phillips. There were some wonderful performances by Heroine December, Raz B, Christopher Michael and many more performers donated their talent for the cause.

Tis the season of giving!!!!