Vinni Ratcliff, famed Hollywood photographer says goodbye to Teena Marie by releasing his last shot of her to her fans

December 28, 2010
Los Angeles, CA, Monday, December 27th, 2010 -- Vinni Ratcliff, famed Hollywood photojournalist has been shooting celebrities for more than twenty five years. Upon hearing of Teena Marie’s passing, like the rest of Hollywood and the world he was shocked.  Vinni had just taken photos of the diminutive star on October 10th, 2010 at Sheryl Lee Ralph’s Diva’s Simply Singing concert held at the Saban Theatre. There he captured Teena Marie and her beautiful daughter Alia Rose on the red carpet and backstage, as one of only two photographers allowed in the  backstage green room area. 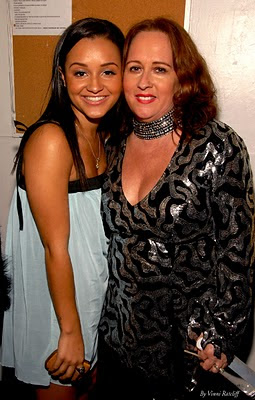 Vinni recalls that Teena Marie was always warm and accommodating at photo requests.
Vinni is deeply sorrowful over her sudden death.  He describes his sadness as being “in a hole” and revealed to his publicist, Eugenia Wright that he had to get away to "the water" (beach front) to compose himself.
Vinni Ratcliff is sharing his last shot of Teena Marie taken with her daughter Alia, to the media and to her fans.  Over the years he has compiled many photos of the R&B superstar.
Source: Eugenia Wright @ ISA PR www.isapublicrelations.com
Photo Credit:  Vinni Ratcliff
###
Eugenia Wright Teena Marie Vinnie Ratcliff