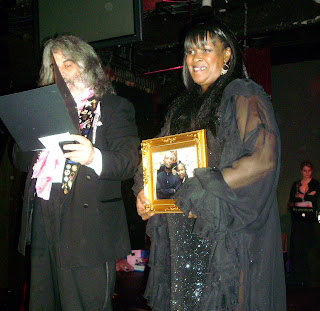 On Wednesday, January 19, 2011 at the $1,000,000.00 Birthday Extravaganza for David Harrison Levi located at The Highlands in the heart of Hollywood, Pamela "Brandy" Sanders was awarded "The Citizen of The Year Award." for the extraordinary hard work with The Kierrah Foundation.  The award was presented by Mr. Harrison- Levi himself . It was a heart felt, moving moment as Brandy held on to a picture of her late great husband Stanley "Unc" Sanders . These two humble leaders founded The Kierrah Foundation in 2004 which provides support to women who have aged out of the foster care system and their children.
This was such a well deserved award for such a phenomenal woman and her mission to uplift so many women who are often forgotten about. Brandy took the microphone and spoke of her and her husband's vision that turned into reality and is bringing forth notoriety and awareness. She says she will continue to carry the torch for her husband as she carries on with their purpose.


Brandy called some of her girls, whom she calls her Kierrah Star Models onto the stage. these young ladies in fact were models in the Fashionation Fashion show that took place as part of the Birthday Celebration.
Myesha Lomack is a Kierrah Girl who will soon be graduating from culinary arts school with high honors. Jasmine Finely is one of Brandy's eldest girls, is a professional model and is starting her own non-profit organization. Tiffany Davis was not only there to model and join in the festivities but she was also in attendance celbrating her birthday as well.


It was also a special occasion for Tuesday Conner and husband Eugene Sydney, designers of the Sydney Collection as they were presented with "The Designer of the Year" Award from David Harrison Levi. Tuesday and Eugene have been angels to the young women of The Kierrah Foundation. The girls have had an opportunity to grace many runways throughout Los Angeles and Hollywood.

Brandy was all smiles and said "Stan would be so happy".  Stan;s Legacy lives on through the strength and perseverance of his Queen, Brandy Sanders.