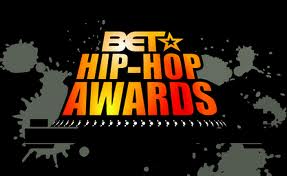 (From BET Networks) BET's hit music countdown show, 106 & PARK, announced yesterday the exciting list of nominees for the Networks' sixth annual BET HIP HOP AWARDS.  During the live taping, rappers Busta Rhymes, Big K.R.I.T. and Meek Mill joined host Terrence and Rocsi as the two revealed the names of this year's top runners. Rapper Lil Wayne leads the pack of contenders with a record-breaking 18 nominations, followed by Kanye West and Wiz Khalifa tied with 9 nods each and Rick Ross with 8 nods.  Maybach Music newcomer, Meek Mill, also announced his inclusion in the highly anticipated cypher segments of the show.  Actor and comedian Mike Epps added to the excitement and confirmed his return as third time host. Hip hop's main event will return to the Boisfeuillet Jones Atlanta Civic Center in Atlanta on Saturday, October 1 with the Network premiere on Tuesday, October 11 at 8:00 p.m.*


Celebrating the biggest names in the game, newcomers on the scene, and shining a light on the community, the BET HIP HOP AWARDS '11 is ready to salute the best of the best in hip hop culture.

For more on the BET HIP HOP AWARDS '11, please visit: www.bet.com/hiphopawards.
This year, BET once again teams up with Cossette Productions, the famed producers of the GRAMMY Awards® and the record-setting BET AWARDS shows, to handle production of the telecast. Stephen G. Hill, BET President, Music and Programming, along with Lynne Harris Taylor, BET Vice President of Specials, are executive producers of the telecast.