"THE GOSPEL ACCORDING TO TIM McAFEE-LEWIS” CONCERT TO BENEFIT THE KIERRAH FOUNDATION INCLUDES TRIBUTE TO WHITNEY HOUSTON, FEB. 19 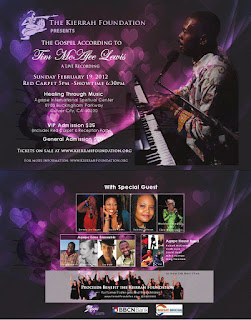 Live Concert Recording to Help Girls Who Age Out of Foster Care
LOS ANGELES – “The Gospel According to Tim McAfee-Lewis,” a concert to benefit The Kierrah Foundation, will be held Sunday, Feb. 19, 2012, at 6:30 p.m. at Agape International Spiritual Center, 5700 Buckingham Parkway, in Culver City, Ca. 90203. All concert proceeds benefit the foundation. The concert will be recorded live.The event also will include a tribute to the late music icon Whitney Houston featuring Sabrina Johnson, one of Houston’s background singers, who will sing “I Love the Lord” from the soundtrack from “The Preacher’s Wife.” Also, 13-year-old Mimi Sledge will sing Houston’s “The Greatest Love of All.Founded in 2004 by Brandy Sanders and her late husband Stanley Sanders, The Kierrah Foundation is a multilevel support system for young women who age out of the foster care system without family or friends. The Kierrah Foundation provides material, intellectual and emotional support to these young women. Through customized life plans and wrap-around services that are designed for their specific needs, the organization has guided hundreds of young women through a successful transition from foster care into adulthood.McAfee-Lewis, who serves as assistant director of the Agape International Choir, has recorded for Island Records, Sony BMI, Capitol Records and Geffen Records. He has performed on the Grammy Award-nominated song, McAfee-Lewis has worked with some of the biggest names in music including Chaka Khan, Will.i.am, John Legend and India.Arie. He has recruited a dozen or so industry friends, each of whom has just as impressive and extensive a musical pedigree as his, for a cause he believes in.Also performing will be singer/songwriter Nailah Porter who has written songs with Grammy Award-winner Billy Childs, and jazz icons, Tom Scott and Jeff Lorber; and Madeline Thompson and the legendary Clara Ward Singers, gospel .The vocal artists will be accompanied by the world-renowned Agape House Band, featuring bassist, producer and vocalist Robert McDonald.“We are a band of seasoned, local music professionals, all of whom are successful in our own right. We may not have the same level of name recognition but have incredible experience and talent that we are lending to a great cause, to help the young women of The Kierrah Foundation,” McAfee-Lewis said.Special guests also include Mrs. Emma McAfee-Davis (McAfee-Lewis’ mother) and Neomi McClendon (his sister).