February 11, 2012
It is such a sad day specifically for the music world on the eve of the Grammy's. At approximately 3:55PM this afternoon, Legendary singer Whitney Houston died at Beverly Hilton Hotel. It was reported Whitney was preparing for Clive Davis' Pre-Grammy Party. The cause of death has yet to be determined. Her publicist has a released a statement confirming her death.
There is speculation that singer Ray J found her. CNN is reporting live up to date details as they unfold.
Whitney Houston gone at the young age of 48.
She and her amazing voice will be truly missed.
She was truly the greatest love of all. Sending lots of prayers to her family and friends.

* Update* It has been reported that Ray J was not the one who discovered Ms. Houston's body, it was in fact her body guard whose name happens to be Ray. Clive Davis paid tribute to the legend at his Pre-Grammy event on Saturday with a moment of silence. Jennifer Hudson sang "I will Always Love you" last night at the 54th Annual Grammy Awards. Celebrities, close friends have expressed their sadness and love for an amazing gift who has touched the world. 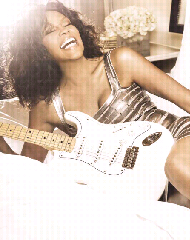