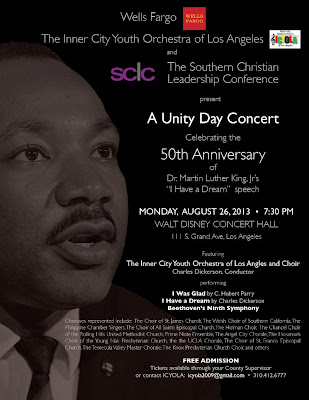 In August of 1963, hundreds of thousands of Americans converged on Washington DC for one of the largest rallies for human rights in the history of the United States.  The "March on Washington for Jobs and Freedom" called for civil and economic rights for those who had been both inadvertently and purposefully denied the opportunity to pursue the very happiness that Thomas Jefferson proclaimed to be the right of all Americans. The March especially sought freedom and justice for African Americans who had particularly suffered the pains of discrimination, hatred, exclusion, and even death through both legal and extralegal processes.  The march is widely credited with helping to pass the Civil Rights Act of 1964 and the Voting Rights Act of 1965.
During that march, on Wednesday, August 28, 1963, Reverend Martin Luther King Jr. stood in front of the Lincoln Memorial and delivered his historic "I Have a Dream" speech;  a speech in which he advocated for racial harmony for all of America.  The speech inspired hope in the hopeless, freedom for the oppressed and light for those who walked in darkness.  It has been repeated millions of times around the globe since that time  and its best known phrase - "I have a Dream" - has become the mantra of all who love freedom and seek a better life - whether in the United States or elsewhere.

Because of its impact, the 50th Anniversary of the speech is being celebrated all over the world!  The celebration in the County of Los Angeles will take the form of a Unity Day Concert to be presented at 7:30 p.m. on Monday, August 26 at the Walt Disney Concert Hall located at 111 S Grand Ave, Los Angeles, CA 90012.

On this day, the Los Angeles County Board of Supervisors will approve a motion by Chairman Mark Ridley-Thomas, to declare this day as "Unity Day"!   The Unity Day Concert represents the County's official celebration of the anniversary of Dr. King's speech.

The concert will feature The Inner City Youth Orchestra of Los Angeles (ICYOLA) in a chorus composed of approximately 150 singers representing various choirs from around the County.  The ensemble will perform: "I Was Glad", by C. Hubert Parry.  The second ensemble will be "I Have a Dream" (a setting of Dr. King's speech for choir and orchestra), by Charles Dickerson (Music Director, Conductor of ICYOLA and producer of the Unity Day Concert.)  The final selection is Beethoven's monumental "Ninth Symphony".

During the Unity Day Concert, various Los Angeles Supervisors will present a "Spirit of the Dream" award to a constituent whose life exemplifies Dr. King's Dream during a special award ceremony sure to be one of the highlights of the evening.  Awardees are:
The Unity Day Concert generously underwritten by a grant from The Wells Fargo Foundation. President of the Foundation, Tim Hanlon, will bring greetings and remarks.  Also in attendance is Jonathan Weedman, Vice President of the Foundation representing Southern California.    The Southern Christian Leadership Conference is also a co-sponsor of the event, and Reverend William Smart, President of the SCLC, will also bring greetings.

The following have confirmed their attendance:

Tickets for the concert are free and are available through the offices of the County Supervisors or through ICYOLA as follows:
www.icyola.org
50th Anniversary Dr. Martin Luther King Jr I Have a Dream Inner City Youth Orchestra KRPR Walt Disney Concert Hall