EOTM Awards: Fitting in by Standing OUT

August 06, 2013
Sunday, August 4, 2013 was a memorable night with astounding energy from some industry "do-gooders" sharing all of their gifts and talents while making a difference in the lives of others. I am talking about the Inaugural EOTM Awards which took place at the Pacific Design Center in West Hollywood, CA.
Nominees and winners both expressed their gratitude for being acknowledge for their profound accomplishments.

Winner of the Entrepreneur of the Year Award and VH1 Basketball Wives Star Tami Roman tweeted, "Thank you Carla and @EOTMAwards for a memorable night recognizing the grind & hustle of entrepreneurs! See you next year :) " Winner of Oustanding Actress  in a TV Series Award, Legendary Actress Marla Gibbs stated, "It feels good to be acknowledged for the first time in 40 years."

It was a definite  loving moment when Hip Hop Legend, Actress and Philanthropist Yolanda " Yo Yo" Whitaker accepted The Aaron Hatcher Humanitarian Award from Aaron's father, Singer Rahn Anthoni and Grandmother Selena Gaffney she stated, " We are all with you in this fight. We support each other." 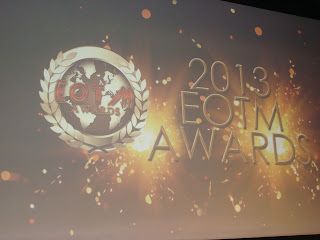 Significatly special recognition to Carla Simpson, CEO of EOTM Media  and Monea Williams, Vice President of EOTM Media for igniting the spark that is going to light up the world.

Below find a collage story of red carpet and award show candids.