“An Intimate Night with Malcolm-Jamal Warner” 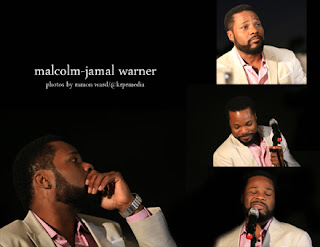 The evening began as you entered the IN THE ART Room inspired by artist Clarence Pencilman Pointer where original portrayals of personalities became alive including a homeless man called “Survivor”,  Steve Harvey, President Obama Barak and the recent Malcolm-Jamal Warner to name a few.  In fact, Warner signed the original piece that went on display to auction. 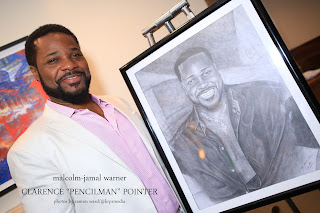 Guests completed the room by taking pictures and being interviewed my Smooth Jazz News, KRPR Media/Urban Lyfestyles Magazine and Comedian Stevie Mack for his television show.

As music subconsciously transformed the atmosphere, dinner began while Dama Tequila circulated samples.  The music, the tasting and mind provoking artwork was just to set the tone for more of what's to come!  And what came next to us all was a surprise!

Comedian Stevie Mack not only hosted the night, but had the guests smiling with laughter through his comedy performance that weaved the entire program into a true night of enlightening entertainment.  12 yr old Comedian Leroya Sanford stepped to the mic next surprising all with spoken words of poetry that seemed way beyond her own understanding yet her approach of deep provoking rhythms could only come from someone that could relate.  Heather Parker, “Funky Sunshine”, brought love and being in love and made you want to go get love.   "THE ORACLE" Denise Lyles-Cook added funk music as she sang and rapped and spoke lyrics about society and self and made the listener groove as they tasted a touch of the 60’s revolution still current with today.  Taking it to the bridged was an eruption of total sexually erotic poems by the guest of honor Malcolm-Jamal Warner.  And while at first you had to get past his known stereotype image of “Theo” from the “Cosby” Show; it was apparent that “Theo” is long gone and what you have in front of you is a grown, deep, sexual, stimulating man…and everyone welcomed it!

A rare and transparent insightful night of deep, emotional and thought provoking poetry that touched the souls of all that heard combined with a touch of laughter was to give awareness to those on Skid Row Downtown LA through Fred Jordan Missions.  In addition, an evening of Spoken Word with Malcolm-Jamal Warner and friends launched TWICEDOT; the next generation's fun and interactive online newspaper with 24/7 personal access to resources, programs, news, shopping, plus top mentors to world leaders and fortune 500 executives. 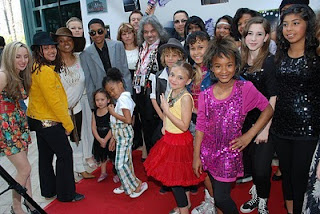