June 03, 2020
I had originally published this article back in April of 2012 on Yahoo! Voices to share my experience and commemorate the 20th Anniversary of the 1992 LA Civil Unrest. I was in my first-year fellowship in Americorps Public Allies Los Angeles program. It was inevitable for me to want to re-publish it now while the world is in an uproar now than ever. Almost, 30 years after the LA unrest, we are still here ...unrested.😡 The memories are still embedded in my mind. I can still remember my world burning all around me  and the rage the was inside me while trying to cope with understanding it all because I was carrying a life within me. I had to learn how to turn that rage into love so that I could be the best mother and student.
It is so...whats the word because sad is not it.... Then, let's not forget we are still in the middle of a whole pandemic😷
2020 is waking us up. In 92, we were screaming, "No Justice, No Peace" and today it is "Black LIves Matter." They both go hand in hand. We are still having to explain our skin, our hair, our culture, our being. We are still judged by the richness of our melanin.
This is the beginning of a series that I hope will evoke some serious discussions, provide some insight, and support us with healing. We are resilient, we are powerful, we are love.
Here is the original article: 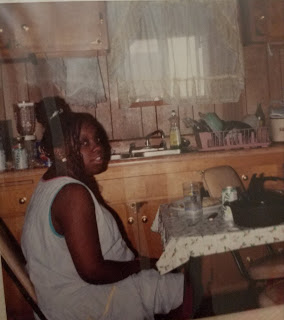 My story of the LA Uprising

It is unbelievable that it was almost 20 years ago that my community was engulfed in flames and chaos. I remember that unforgettable day like it was just last week. I was in the 10th grade attending Middle College High School, however, I did not go to school that day because I was not feeling too well. I was 15 years old and 4 months pregnant with my son.

At the time, I was struggling with not succumbing to the statistic that everyone told me that I would become outside of my home. I loved school; I loved and still love the neighborhood where I grew up. My block, 68th and Normandie, was such a cool block. Everyone looked out for everyone. My little brothers, Leonard was 9 years old and Leron was 6 years old, and I played outside with our friends on the block until the street lights came on.  I recollect everyone, including myself, being anxious about the verdict of the officers who beat Rodney King. I too became sad and then enraged when I heard the not guilty verdict.

Soon after, I remember seeing Reginald Denny get pulled from his truck on television.  I could not believe it was happening just a few blocks from where I lived. There were people everywhere. I have never seen so many people on Florence and Normandie in my life. That same sadness and rage that I had quickly became fear especially when I began to smell the smoke. I had severe asthma so my mom was fearful of an attack coming on. She did her best to keep my brothers and I calm. I knew she was scared as well not only for us but because my dad was literally on his way home from work when the riots broke out. We did not have the luxury of having a cell phone back then so all she could do is pray that he was safe. It seemed like everything was getting worse. It probably took my dad an hour or so to get home but then it seemed like forever.

Within an instance, my whole world was turned upside down. My dad ran outside and watered the house down.  Our telephone was ringing non-stop, the television was reporting non-stop and I wanted it all to stop. I was about to be a mother. I remember thinking, “Is what they are saying true. Is there no hope for us? Will I be that welfare mom who has another baby before I am 18 and drop out of school? Is my life and the life of my child already mapped out for us?”

I saw the very people who were supposed to serve and protect only protect the rich in a comforting way. I saw my community protected with force and abuse. I saw the images of the people labeled as thieves, terrorists, looters, hooligans, thugs and gang bangers. Everyone fit into those category no matter where or who you were in my neighborhood. We were in the hood therefore we will be treated as such were my thoughts.

Days later, the smoke cleared yet there was an unbearable pain and damage. One of my friends and his mom lived on top of the corner liquor store. I remembered crying my eyes out because their place was burned to the ground. My parents frequented the gas station on the corner of Florence and Normandie, however, they could no longer go there and had to go to another city to get gasoline. I vividly recall their panic in traveling in fear of running out. As we traveled, all I could see was the reality in my community. What was left after was what was felt after.

20 Years later, my community still stands with rich culture and love. The pain is still there from unheard and untold stories.  There is still much healing to take place. The images that are in the media still do not fully reflect the true essence of my community. My parents are still on the block. My brothers are doing very well. Leonard has his PhD in Computer Engineering and Leron is currently has his MS and is a PhD candidate in the same field.

As for me, I did not become a statistic. I graduated high school with 3.93 GPA, went on to college to get an AA in Journalism have my own business, done some phenomenal things and I became a downright activist who has now turned into an ally. My son will be 20 years old in November and is in his finishing his sophomore year at Northern Arizona University.

This struggle has started so many movements and created so many leaders. I am beyond eager to see the continued empowerment within our community.